They are a power – but a good, gentle, almost secret power. For over 20 years, the magical-light sound of De-Phazz has been inspiring the listener, freeing consciousness and  sending thoughts on their travels. The Heidelbergers are both the regulars and governors of Lounge and Easy Listening. This power enraptures the mind and enchants the dance floor, catapulting us into new atmospheres with every track: A fusion of samba and soul, trip-hop and jazz, Latin and R’n’B, where you can literally feel the sand under your feet, the sunbeams on your skin and the salty air in your nose.

However, how does this atmosphere fit in with the most atmospheric celebration of all, with the cosy aura and enchanting magic of a wintery, cold Christmas? This fits perfectly, once you unwrap “Music to unpack your Christmas present”. From the first note, you feel and understand: whether chilling in the Café del Mar or cuddling under the Christmas tree – as always with De-Phazz, it’s all about the power of the right mood. One only wonders why the self-proclaimed lounge punks are only now coming around the corner with their first winter Christmas album, after 15 previous LP’s?

Whatever the reason, as usual the skilfully subtle De-Phazz take us into their fantastic Christmas world, which seems to lie somewhere along the Copacabana: here Antônio Carlos Jobim himself plucks the Bossa Nova, while João Gilberto and his wife Astrud scat sing, “ba-di, ba-du, ba-dong”? The track is called “Sua Alegria”, meaning “Your joy”; they are Ulf Kleiner and Caro Trischler! The former conjures up a relaxed-jazzy melody on the piano, which half fits in, but which could also tell us more if we could only get hold of it! And then the penny drops, the track is called accordingly: “Oh Du Fröhliche!” (Oh Thou Joyful Day), a German Christmas classic, finely intertwined, with wit and skill.

That remains the recipe for the entire album. According to producer Pit Baumgartner, the ambition and also the fun of the production was to create an atmosphere in which the Christmas themes play “in the second row”.  Who wants to have his nose poked directly into the eggnog and chocolate balls? The “Gloria” (“In Excelsis Deo”) comes along as a complete reggae dub; the alpine advent game “Who knocks?” in best James-Last mentality with echoes of the Herb Alpert classic “What now my love?”, world-famous through the Elvis show “Aloha From Hawaii”. As a special treat we also have, “Ihr Kinderlein kommet”, “Jingle Bells” and “Douce Nuit” (“Silent Night”) lyrics sung in Japanese and French – never has Christmas been so immersive and so deeply relaxed.

The album offers high suspense, especially in the new and original compositions. Sandie Wollasch whispers her sweet “Little Boy” and the catchy “Dingdong Day” as if they were already Christmas classics of Doris Day’s “Winter Wonderland”: sweet as a Pumpkin Spice Latte. Regular De-Phazz chanteuse Pat Appleton celebrates her orchestral “Noel Alone” in pyjamas between silk sheets, the telephone receiver next to the fork. Later, in the soft-rocky “Snow Gone”, she channels the well-known Christmas blues, when instead of snow only the grey rain claps against the windowpanes. Meanwhile, lead singer Karl Frierson goes completely nuts and funky in “Christmas Treats”, and that only because of the coconut-chocolate Christmas treats. Jeanne Crémer writes a “Lettre au Père Noel” and breathes like a young Carla Bruni, appearing touchingly fragile in front of a simple guitar arrangement.

Other people appear on the album, including guest musicians and friends. After all, Christmas is a big get-together of the whole family. We hear the sister of… here, the daughter of… there, the girlfriend of…, the ex of…! Due to distance, for this production, not all musicians could come together in one place; some have even only met virtually until today. Nevertheless, the lettering “De-Phazz & Co” on the cover is more than all right.

The cover also raises questions: Why does the album title say that only one gift can be unwrapped, in the singular? A new consumer economy? When the album has so much wonderfully colourful, acoustic wrapping paper to offer? Furthermore, the typography of the lettering of “De-Phazz & Co” resembles exactly the brand logo of the jeweller “Tiffany & Co”, the top address for expensive gifts! It is fitting then that the echo jazz trumpeter Joo Kraus has contributed a unique version of “Moon River” to the album, the classic from “Breakfast at Tiffany’s”. A matching jewellery box is also featured on the cover – but there is no expensive bling-bling in it, but a shimmering blue feather. Well, if you could give away easiness for Christmas, then it would look like this. Or sound like De-Phazz. 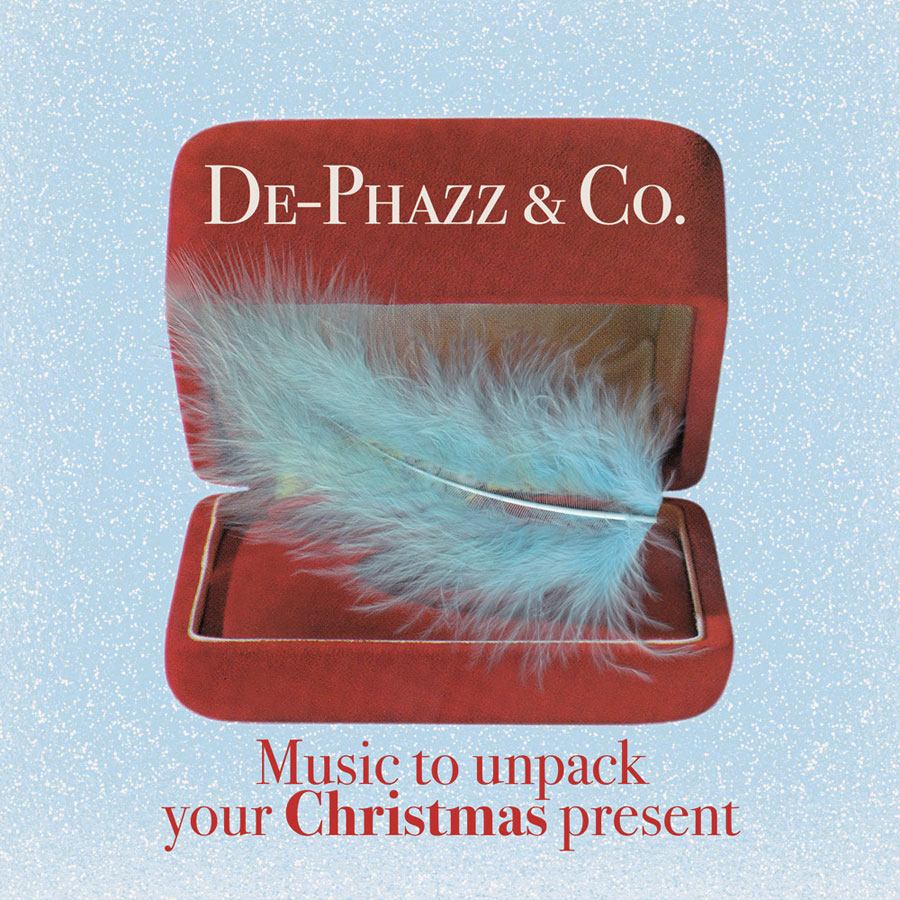